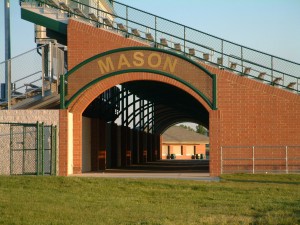 OUR STUDENTS RANK IN TOP 2%

The Mason City School District is one of Ohio’s most elite public school districts. It consistently ranks in Ohio’s Academic Top 10 – placing 6th out of 613 Ohio school districts this year. We are proud that students in every grade level consistently score above the state and national averages in reading, writing, math, science, social studies, and on the SAT, ACT and AP tests.

90% of the Class of 2015 will attend a two or four-year university in the fall. We offer 22 Advanced Placement courses, and all students are encouraged to take at least one AP course before they graduate. In addition, we have many dual-credit classes where you can earn college credit and MHS credit. This year, Mason once again made AP’s Honor Roll – one of 547 districts nationally being honored by the College Board with placemen on the 5th Annaul AP District Honor Roll for simultaneously increasing access to AP course work while increasing the percentage of students earning scores of 3 or higher on AP Exams.

Mason High School is the largest high school in Ohio – but for us, big means big opportunities for students to find their niche and hone their passions. MHS is filled with dynamic teachers and staff, bright and hard-working students, and dedicated families who believe in growing greatness together. With nearly 200 course offerings, MHS has a national reputation for providing students at all ability levels with the tools to succeed.

Our William Mason Marching Band consistently ranks among the top marching bands in the US, and in January will be performing at the Rose Bowl Parade. Our Symphonic Band and Wind Symphony recently performed at Carnegie Hall, and we’re the only Ohio band to receive the Sudler Flag and Sudler Shield. Our nationally-ranked orchestra program has performed in some of the most prestigious venues in the nation, and recently earned the highest rating possible of “Unanimous Superior” for the Symphony Orchestra students’ musicality and artistry. Our fall and winter plays and spring musicals regularly rank among the best in the TriState at the regional Cappies Awards, and our student artists regularly earn national scholastic gold and silver keys for the masterpieces, as well as hefty visual art scholarships.

DIVERSITY THAT REFLECTS WHERE WE LIVE

MHS offers five world languages from beginner to Advanced Placement: American Sign Language, French, German, Spanish (students have the ability to begin Spanish in middle school) and Mandarin. In addition, Mason Schools have a renowned English as a Second Language Program for the 5% of students district-wide who are English Language Learners.

A FINANCIALLY RESPONSIBLE DISTRICT IN A TOUGH BUDGET ENVIRONMENT

Mason City Schools operate a balanced budget and its leadership ensures strong fiscal accountability in a state budget environment that is not always favorable to large urban districts.

Currently, the district is financially stable and teachers are being hired based only on retirements and shifting curriculum-based priorities (e.g., hiring a STEM lab elementary teacher).